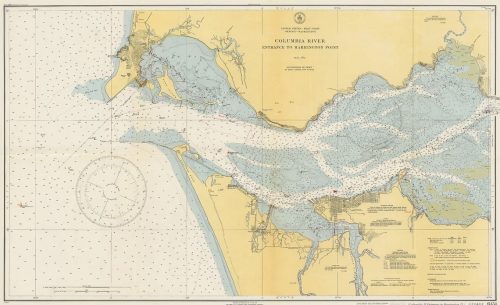 The village of Chinook, WA, on the north shore of the Columbia River at its mouth, grew up around the wealth of salmon that once swarmed upriver.  Since the days before written memory, the first peoples of the region–the Chinook Indian Nation–have lived here, harvesting those famous fish.  Their cedar long houses were old when Lewis and Clark visited in 1806.

From the late 1500s on, nations sent seafarers in small ships sailing the world seeking riches and new territory. The Pacific Northwest between California and what would become British Columbia was one of the very last corners of the world so explored and mapped. In 1792 Capt. Robert Gray of Boston found his way across the treacherous Columbia River bar; in 1806 Meriwether Lewis, William Clark, and other members of the Corps of Discovery paddled downriver to the Chinook village; and the men of John Jacob Astor’s Pacific Fur Co. struggled in over the bar, settling on the south shore at Astoria. In those days the main channel of the Columbia ran close to the north shore, flowing around Sand Island and on away up east.

That shoreline is where the fishermen settled, first the Natives at what Lewis and Clark called “Middle Station,” just east of the highway tunnel; then retirees of the Hudson’s Bay Co. (the predecessor of the Pacific Fur Co. at Astoria); then European immigrants who knew how to earn a living catching, salting, and selling fish. The area of north shore settlement between Point Ellice (where the Astoria-Megler Bridge reaches the Washington shore) and Fort Columbia (where the highway goes through the tunnel) was generally known as “Chinookville;” it was the second seat of Pacific County (Oregon Territory) between 1852 and 1854. In the 1850s Irish immigrant, P. J. McGowan arrived, bought land from early settler Catholic priest Fr. Lionnet, and filed for a Donation Land Claim. McGowan began catching and salting salmon for export; later he built a successful salmon cannery.

In the early 1900s he also built St. Mary’s Catholic Church which stands by the roadside just upriver of the highway tunnel.As this remote North American corner began to be settled by Europeans and “Bostonmen,” and national and regional newspapers began to take note, we find the occasional reference to the village of Chinook.  (An April 1853 issue of the Weekly Oregon Statesman from Salem, O. T., lists just four post offices in the north coast of the Oregon Territory:  Astoria, Point Clatsop, Pacific City, and Chenook.) In the early 1850s, “Bostonman” James G. Swan joined a friend from Shoalwater Bay (now Willapa Bay) to watch Chinook Indians seine for salmon on the Columbia River shore.  Swan’s article in Harper’s Weekly of August 22, 1857, shows that scene, the rising sun, and Mt. St. Helen’s upriver to the east.

Immigrant fishermen soon developed “fish traps”—an arrangement of pilings sunk into the River bed, from which nets were suspended across the incoming tide. Upstream swimming salmon ran afoul of the net; at low tide, the trapmen took the stranded fish to the buyer’s scow, or to the cannery, and were paid or received credit on the spot.  No inventory, no storage, fresh fish.  Neat.

Early day canneries—the region once had 39—became an industry and some local fishermen and canners got rich. The rumor continues to this day that in the late 19th century times Chinook was the richest town, per capita, in the United States. Perhaps it’s true … Not long after, the United States Army bought Chinook Point—Scarborough Head—and built Fort Columbia. First, it was to help Ft. Adams and Ft. Canby protect the mouth of the Columbia during the Spanish-American War; then it was to serve the same purpose in both World War I and World War II. The prosperous citizens of the lively community of Chinook valued family life, and that included the education of their children. They chose to spend some of their wealth on a solid school for their youngsters.

In the decades before 1920, the community had several editions of a K-8 school in the Chinook farmland east of the village we know today.  Chinook was its own school district, and in the 1910s it decided to build a gymnasium. Basketball, in particular, was a much-loved community sport. Chinook fielded a famous team of relatives; soldiers stationed at Fort Columbia and teams from other villages played a serious game. The rains of winter dictated an indoor playing court. Citizens wanting to build a new and up-to-date school went to Astoria’s noted architect John E. Wicks. Wicks, a Finnish immigrant, was respected for his attention to detail, things such as timing how long sunshine shone through which windows on what wall. His careful thought produced Astoria buildings that were practical, attractive, of differing styles, built “hell for stout,” and running the gamut from residences to businesses to schools to hospitals. For Chinook, he designed a gym, built in 1921, and a modern schoolhouse, built in 1924. The schoolhouse, now called the Community Building, features cement construction, lots of windows for excellent lighting, nice wide hallways, and crisp clean tile bathrooms.

These two fine facilities served the school children and the community as gathering places to host traveling speakers and evangelists, chautauqua assemblies, fairs, and school celebrations, band and choral concerts, community plays, immunization drives, Boy Scout honor courts, anything of community interest.  The school’s library was available to citizens.In the late 1920s, an animated young teacher named Angus L. Bowmer taught at Chinook, galvanizing the community to support stage plays, going so far as to have students wrangle driftwood from the beach with which to build the stage. Bowmer went on to found Ashland, Oregon’s, famed Shakespeare Festival.

In the late 1930s, when 1936 Olympic Gold Medalist Jesse Owens toured the region, Chinook youngster Patricia Erickson remembered his visit, decades later exclaiming “… and I got to shake his hand!” When World War II’s sacrifices required the rationing of gasoline, sugar, tires, and almost everything, the program was explained to the community at the gymnasium. The village received its polio shots there in 1957. In 1966 the Chinook School District was replaced by the consolidated Ocean Beach School District #101. With that, the village on Baker’s Bay lost part of its heart. Other things made changes in the village’s life: in the 1930s, in a state-wide election, fish traps and other forms of “fixed fishing gear” were outlawed; and from the 1940s on, sports fishing during the summer season brought cars, trailers, boats, and visitors piling into town in a distinctive form of carnival. Shortly after 2000, locals decided that the Chinook school buildings were just too good to let rot.  A group of volunteers galvanized the Peninsula’s population to restore these proud old buildings to once again serve residents and visitors planning parties, meetings, reunions, memorials, weddings, concerts, plays, and sporting events.

This article was written for Friends of Chinook School by local historian Nancy Lloyd. Ms. Lloyd is also the author of the series “A Nest of Dangers”, which can be found in the Chinook Observer, and is highly recommended for anyone interested in local and marine history, as well as entertaining reading. –al